It’s been pretty quiet on my blog lately…. well for months really. What can I say? I’ve been busy. Poor excuse you say, and of course you’re right. Last year is too long ago to remember properly. Just briefly, I started a new challenge with Reddy Arts, joined some drawing classes on how to draw birds, taught by Natalia Balo http://www.bfineart.com.au/ and spent loads of time drawing portraits from photos on Sktchy. I taught a textile workshop (Life Amongst the Lilies) to some of the QQ ladies mid year, tweaked some quilt designs/patterns; made some baby quilts…… worked at my real job, did some reading………… and started a diary (essential if you suspect you have a failing memory…) The difficulty is remembering to write in it.

Now I am looking forward to continuing to improve my drawing and painting skills, as well as keeping some textile art coming. I would like to explore mixed media, and have recently joined a suburban sketchers group, which gets me out with like minded people and helps to overcome that self consciousness of drawing in public.

Until my next post, I wish you all many happy and creative hours pursuing your art endeavours!

My one excuse for not blogging lately, is that I have been SUPER busy… I recently completed a commission, and the idea was that would free my time up somewhat. Here is the completed work, made for the reception area of Kedwell and Co, Accountants in Sandgate, Queensland. 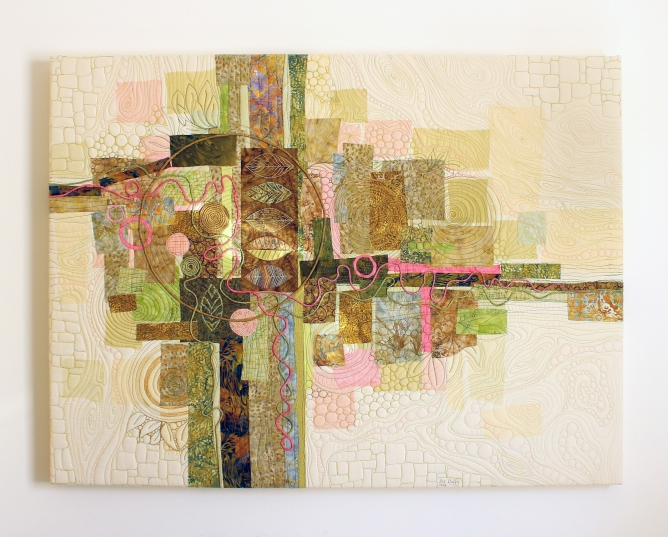 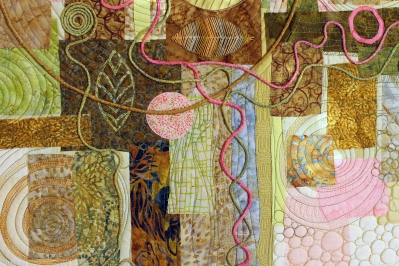 I have been working on some workshop samples for my “Creative Landscapes” Workshop “Life Amongst the Lilies” to be held in October in Redcliffe. Today is the day those were finished, all bar the labels and hanging sleeves. In this 3 day class you will learn to lay down basic backgrounds,  and how to pull together a pleasing composition using a variety of techniques to achieve this. Two designs offered with interchangeable elements. To participate, please contact Brenda at 2Sew Textiles.

Life Amongst the Lilies 1

Life Amongst the Lilies 2

Life Amongst the Lilies 3

In the midst of all this, I made a small quilt (below) to enter into “One Red Thread 2018 – “WeatheRed”, at Berry Quilting Retreat which was fun to make and features our local red cliffs and a solitary tree clinging to life as the cliff is weathered away….

My next effort will be a couple of small unicorns, but first I need to make a wedding dress for my younger daughter – that will be fun! If a little daunting, it is some time since I did any dressmaking……

In the meantime, my 100 days project fell by the wayside around Day 60, but I did  #62 last night…. I need to try and do some portraits now…. this one done in Procreate on my iPad 9.7 with Apple pencil. I love being able to use the pencil brush and change the colour, size etc. Great practice, although erasing is too easy…..

That’s it for now, have a great month!

Today, as the big wet (compliments of ex Tropical Cyclone Debbie) drenches the southeast, I recieved notification that my latest artwork didn’t make the grade for the Moreton Bay Regional Art Awards – no matter! It was the very first time I have entered this competition. I’m not much given to entering competitions, but sometimes they pay off and often in the most splendid and unexpected ways! Just not this time, alas. I ought to have approached this piece with 4 intact sides perhaps, and no empty – literally!  – spaces…. but no, not me, who likes to make it complicated.

I made this to be

2) as a possible entry in the Australasian Quilt Convention Challenge – Fauna and Flora of Australia –  but it transpired that by it’s very nature, it would not fold well, therefore would not travel well, and as a consequence I opted not to enter – clearly I didn’t think that one through…

3) it being not entered in AQC decided to give MBRAA a shot…. never mind, I think it looks good on my wall!!!

I have named it “Cooloola Flight”. Because it’s an aerial view of the Cooloola wetlands and it features a wonderful bird we saw there – a Black necked Stork. An Aussie would call it a Jabiru. We spotted it out in our canoe on Lake Cootharaba, and was the biggest thrill of all of our canoeing excursions. He was just sitting on a little island, minding his own business, then as we drifted closer, he casually got up and strolled away for a drink, and eventually flew off to feed around the corner.

In  this piece the lake and river systems of Cooloola Wetlands are depicted by the empty spaces….. it will be exhibited as one of my pieces at Pine Rivers Art Gallery along with the Reddy Arts Textile Group’s work in December and January…. until then here is a wee sneak peak because I’m too excited about it to save it for a few more months! But you will be able to see it in the cloth there.

Lots of you have seen my first piece in the series – see “Cudgera Creek”  and my previous post for photos. This quilt is now in Melbourne and can be seen at the Bernina   Best of Australia Awards at AQC 20-23rd April 2017.

I am currently working on my third piece, which is based around the Tinchi tamba wetlands, on the Pine River. Now I really must go and sew!!!

The last few months have passed in a blur. After doing about 3/4 of the 100 day challenge, which for me isn’t too bad an effort, and completing three lap quilts in about as many months, the art quilting has taken a bit of a back seat lately. Maybe it’s the time of year, after all, it is now the final week of 2016… Christmas celebrations take up a fair bit of time, much as we love getting together, exchanging gifts and eating well!  It seems to me though that time is of the essence when there are deadlines to meet. Creativity works best for me when it is spontaneous, but I do like to have a plan as well…………. sometimes the plan doesn’t always work, and outside pressures tend to inhibit spontaneity….. maybe it’s time for a little R&R, some physical workouts  (read cycling, swimming and canoeing, long walks on the beach, playing with the dogs, even gardening). We are officially on holiday, not a sewing machine in sight. I do have my cameras with me though. 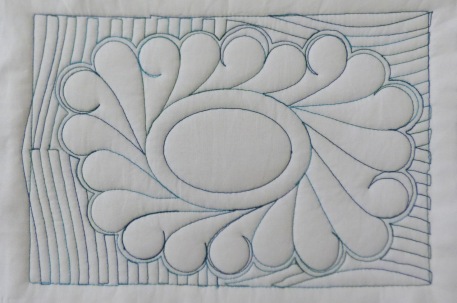 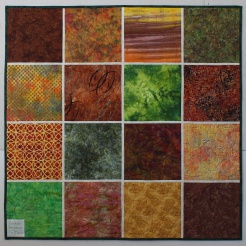 Not Everything is Black and White 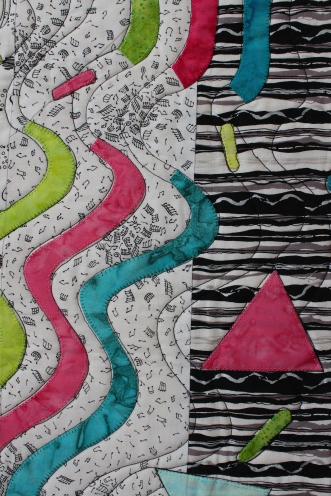 detail from Not Everything is Black and White

I did manage to make a few little Christmas gifts – (secretly, I have been wanting to make mug rugs for ages! Hahaha! (Binding by machine practise….) Then I saw these great  little fabric stars, which I couldn’t resist making. 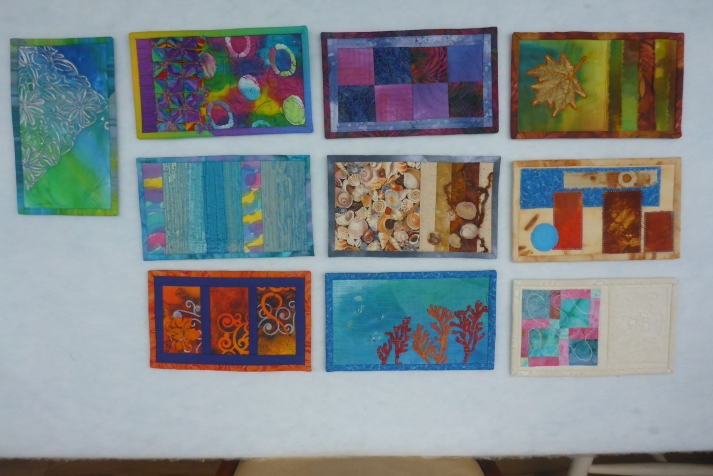 My last wee completed piece for the year is this wee seahorse which I had much fun making! 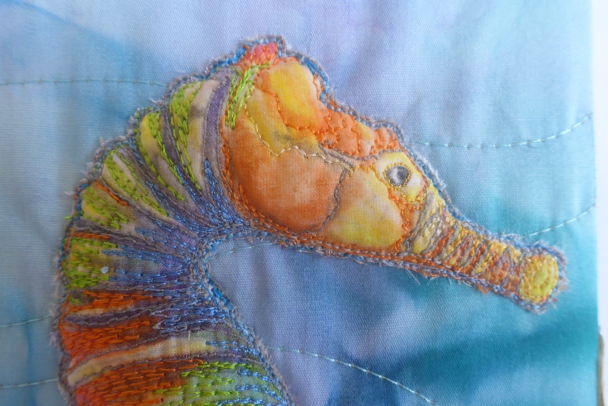 Wishing you all a wonderful, creative, prosperous, healthy and happy 2017!

This was a day right up there with those pinnacle of your life days – you know the ones, high school and University graduations, Wedding day, Births of the babies days…. today was the day I won the Bernina Best of Show award at the Queensland Quilt Show!!  still on a high, can’t stop smiling!!

face says it all! 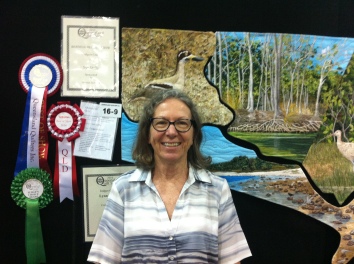 The ribbons and the grin 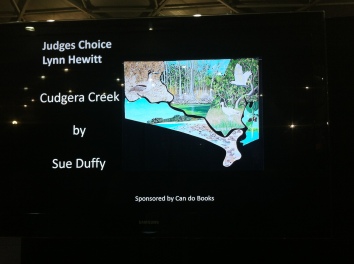 Oh and a judge’s choice win as well, thanks Lyn Hewitt

Thank you to the judges, Glad Howard, Lyn Hewitt, and Rachelle Denneny;  to  QQ President Judie Bellingham and the management committee of Queensland Quilters Inc; Bernina Australia; all the other many Queensland Quilt Show Sponsors, and Expertise Events –  wow what a day! Thanks to all my lovely friends and acquaintances and fellow quilters and all the ladies(and men!)  for your fabulous support and kind words and admiration today, it was a fantastic experience and you all contributed so much to my brilliant day!

Completely excited that my textile art piece won, and now we are off to Melbourne for AQC and Best of Australia awards early next year, so exciting to be a part of that!! Will be celebrating all week.

Many thanks to Bernina Australia for their wonderful and continuing support of the craft of patchwork and quilting, to Queensland Quilters Inc who organise the quilt show, (see the rest of the fantastic and beautiful winning quilts at the link) and their dedicated members who do the most amazing behind the scenes work for many months in the lead up to the show, and to Quilt and Craft Fair (Expertise Events) for hosting the show. It all takes a great deal of planning and plain hard work to bring it all together every year so that the rest of us can not only enjoy making our art but also sometimes reap the rewards, such as I have been blessed to do so, today. I am so happy, so grateful and just plain astounded. Thank you all.